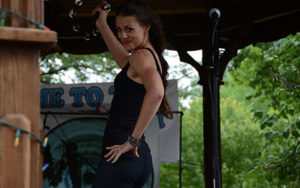 Melissa (a.k.a Missy Snot Rocker) is the lead vocalist, along with Michael Restivo.  She also does backup vocals and harmonies and plays a mean tambourine!

Melissa has had experience singing with several bands in the past.  She took a break from bands to have her two little girls, but now that they are school-aged, she’s ready to rock again.

Melissa has been influenced by boundless female recording artists and vocalists.  Some of her favorites include Patsy Cline, Connie Francis, Joan Jett, and Pat Benatar.

On the side, Melissa loves to write poems that she hopes will become band originals in the near future.

The band jokingly calls her a “diva,” and she likes to joke back that she is one, but she really isn’t.  They call her snot rocker because she’s not afraid to blow snot rockets.  Not on stage!  Don’t worry!  Only when she’s out for a run.

In the future, the band might give her double duty as security, since she also loves working out and lifting weights.  Above all, she loves to sing and bring smiles to people’s faces.